What Is Organisational Agility and Why Should We Care?

As existing value chains are disrupted by agile, innovative competitors, simultaneous shifts in consumer expectations and behaviour are forcing businesses and governments to adapt. The scale of change is challenging our assumptions about organisational forms and what is necessary to survive in such a potentially turbulent transformation. For governments the implications are profound, ranging from how policy/regulation is formulated, and the necessary speed of response, to the role of government itself.

"A radically different world is forming, the operating system of the world's economy is being rewritten as we speak. It doesn't come out in a splashy new release. It evolves, unfolds, and often explodes."
No Ordinary Disruption

In their 2015 bestselling book, No Ordinary Disruption, Richard Dobbs and his colleagues argued that the world is in the middle of a dramatic transition due to the impact of four deeply disruptive trends:

These drivers of change are impacting us all in profound and highly unpredictable ways.

One Industrial Revolution Is Never Enough!

During my studies in the late ’80’s I’d been enthused by the growing body of research into teams, models of team working and new organisational models. My first job as a psychologist included being part of team researching teleworking/flexible working. The potential for information technology to transform the workplace was becoming clearer and it seemed like a new world of work was emerging. A more humane, empowering and energising workplace was just around the corner.

However, that new world has been dropping slow to arrive. Many organisations are still sclerotic as a result of undue hierarchy, functional silos, dysfunctional cultures and poor work design. Yet, thanks to global communications and social media we are seeing a burgeoning debate about work, its value, as well as the impact of technology such as robotics and AI on jobs and the workplace.

Perhaps it is only now that we are seeing the wider impact of ubiquitous technology on work and organisational design that was heralded several decades ago. Klaus Schwab, Executive Chairman of the World Economic Forum, suggests that we are on the brink of the fourth industrial revolution:

Key to the challenge organisations face now and in the future is the exponential rather than linear pace of change. As a result whole systems of production, management and governance are likely to transform. As Schwab describes, even the most informed and well connected business leaders are in a state of “constant surprise” as a result.

As existing value chains are disrupted by agile, innovative competitors, simultaneous shifts in consumer expectations and behaviour are forcing businesses and governments to adapt. The scale of change is challenging our assumptions about organisational forms and what is necessary to survive in such a potentially turbulent transformation.

For government the implications are profound, ranging from how policy/regulation is formulated, and the necessary speed of response, to the role of government itself.

So how can organisations, regardless of sector, respond to this tsunami of change?

Develop organisational agility. In the absence of stability and predictability, the capability to be responsive and agile regardless of circumstances is every bit as critical as how you are managing finance or delivering a product or service. Change management capability is an essential building block for agility.

What Is Organisational Agility?

The concept of organisational agility has been reflected in the strategy and organisational literature for decades. Many of the building blocks of agile organisations have a similar lineage.

Although not fundamentally new, the current concept of organisational agility is helpful as it refocuses the debate on the need for a response to unprecedented change. It also incorporates thinking from Agile project management methodology which helps organisations tackle the ‘how’ of becoming agile.

There are numerous definitions of organisational agility/agile organisations. My own is the following:

“ORGANISATIONAL AGILITY IS THE CAPABILITY TO ADAPTIVELY RESPOND, CREATIVELY, SPEEDILY AND SUCCESSFULLY TO A STATE OF CONSTANT, UNPREDICTABLE AND PROFOUND CHANGE.”

What Are The Building Blocks Of Organisational Agility?

In my view the essential building blocks can be summarised into three:

Agile organisations depend on harnessing the skills and goodwill of their people. Traditional command and control approaches to management and leadership fly in the face of responsiveness which depends on people closest to the task making as many of the decisions as possible.

At the heart of agile organisations is a culture of change that moves from a reactive mode of operating to one of agile thinking, collaboration, clarity of purpose, simplified decision-making and empowerment.

Fundamentally the agile toolkit refers to a suite of methods, approaches and bodies of knowledge that when combined offer the organisation the ability to execute strategy quickly with the greatest positive impact. These include, for example, change and project management, agile methodologies, OD, process improvement, organisation and work design.

What Are The Characteristics Of Agile Organisations?

In my view, agile organisations exhibit:

A New Beginning Or Back To The Future?

Many of the arguments for flatter organisations, empowering leadership cultures, flexible modes of working etc. have been debated for decades in both the academic and practitioner literatures. Perhaps now however, we are seeing a context that will establish organisational agility as a priority for leaders everywhere. 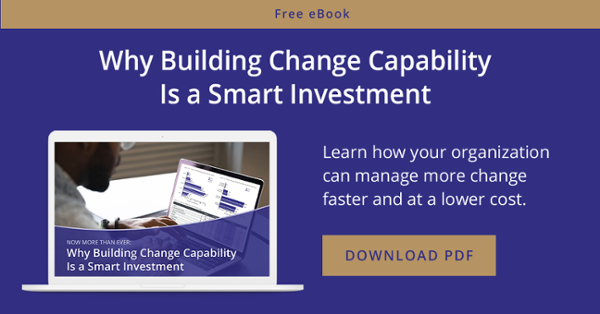 Angelo is a business psychologist, facilitator and co-founder of STEPSTONE Consulting. His focus areas include: change and project management capability, innovation management and culture change.

1. Develop a more agile organisation Many organisations are facing the demands of faster, more complex and more interdep...

What is Enterprise Change Management?

What is Enterprise Change Management?

While many organisations have adopted change management it is often applied on isolated projects and initiatives. Organi...

The change management discipline has evolved significantly over recent decades from ad hoc approaches to a rigorous prac...